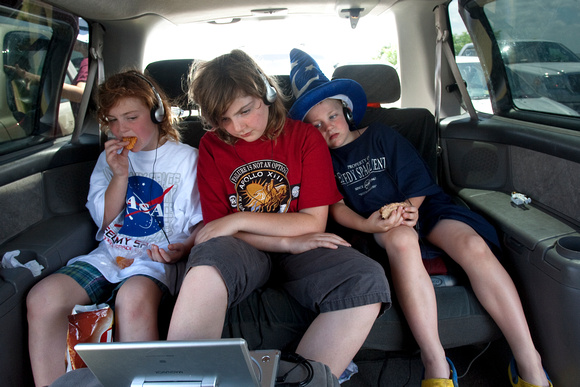 CHRIS ZUPPA | Times
SP_339528_ZUPP_Shuttle
(Titusville, 05/14/2010) Sara Gerber, 7, and her siblings, Megan Gerber, 10, and Ben Gerber, 4, of New Bern, N.C., watch DVDs while waiting in their parents' mini-van for Atlantis to launch, the space shuttle's second to last launch. The kids were in Titusville with their dad and mom, Terry and Kate, and their grandmother, Joan Gerber. They spent the week leading up to the launch at Walt Disney World where Ben first saw Mickey Mouse's magician's hat. Priced at $20, his parents considered it too expensive. On launch day, his mother saw the hat at a Thrift Store in Titusville for $3. "And as you can see, he hasn't taken it off," Kate said. [CHRIS ZUPPA, Times]
St. Petersburg Times
User Agreement
Cancel
Continue