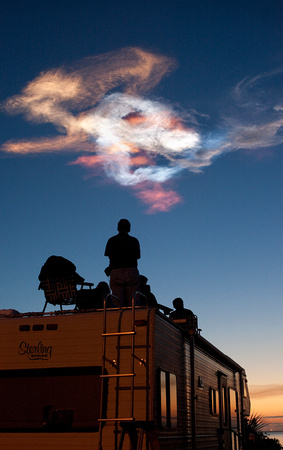 CHRIS ZUPPA | Times
SP_339528_ZUPP_Shuttle_1
(Titusville, 04/05/2010) Perched atop a camper next to the Indian River, Ward McCance of Cobourg, Canada, admires the beautiful colors in Discovery's contrail. "Isn't that amazing, especially with the sun hitting it?" McCance asked. The space shuttle launched at 6:21 a.m. just before sunrise on April 5 last year. It was Discovery's next to last launch in its long career that spans three decades. It is unclear what is next after the shuttle program. NASA plans to privatize parts of space travel, such as hiring firms to take cargo to the International Space Station. And the space agency will continue to develop a new space capsule and rocket for deeper space travel. Until then, American astronauts will probably hitch rides to the International Space Station with the Russians, who were once our greatest motivation to be the best in the space race. "It's a shame to see the end of it," McCance added. "I hope something gets going soon." [CHRIS ZUPPA, Times]
St. Petersburg Times
User Agreement
Cancel
Continue