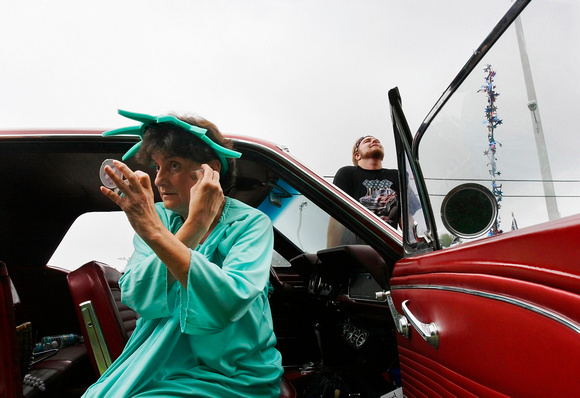 TP_270340_ZUPP_Onevoice
Caption: (07/04/2007 Lutz) Terry Cone, 57, applies the finishing touches to her Lady Liberty costume before the start of the Lutz Independence Day Celebration parade. Cone rode on the 1966 candy-apple red Mustang's hood while Mark Walters, 19, right, drove the car. The story, in her words: "I liked the way it sounded, Lady Liberty riding on a Mustang. It was two American classics. I thought I was going to feel weird, but I tell you, I came around that first corner and saw all those people and it was just fabulous. I teared up a little bit. Parents started to point to me and tell their children, "That's Lady Liberty!' I was a part of making memories for all these people and myself, too. It took me back to parades when I was a kid. It took me back to the 60s and riding around in Mustangs and hollerin' out windows. It was like being a teenager again.'
(CHRIS ZUPPA | Times)
Summary: One Voice on Lady Liberty.
St. Petersburg Times
User Agreement
Cancel
Continue