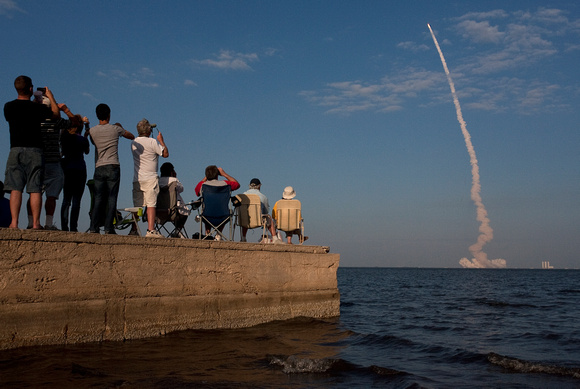 CHRIS ZUPPA | Times
SP_339528_ZUPP_Shuttle_8
(Titusville, 2/24/2011) Spectators are fixed on Discovery as it cuts through clouds on its 39th and final flight on February 24. The orbiter's first mission was August 30, 1984, and plans are for Discovery to be displayed at the Smithsonian National Air and Space Museum in Washington, D.C. A total of six shuttlesÑEnterprise, Columbia, Challenger, Discovery, Endeavour and AtlantisÑhave been a part of the fleet. Enterprise only flew test flights, never leaving Earth's atmosphere, in the late 1970s. Columbia was the first space shuttle to launch into orbit on April 12, 1981. The orbiter broke apart during its reentry to Earth's atmosphere in 2003. Challenger blew up in 1986. Both Discovery and Endeavour flew their final flights this year. Atlantis will be the last in the fleet to go up. [CHRIS ZUPPA, Times]
St. Petersburg Times
User Agreement
Cancel
Continue